How to Manage Office 365 Identity Models

Are you new to Office 365? Wondering how to create users and where to store user passwords, or how the main Office 365 identity models work?

Don’t worry—this article will help you understand all the three Office 365 identity models and the major differences between them so you can choose which one is best for you and your organization.

This is the simplest and most basic identity used in Office 365.

This model is mostly used when you either have a small organization with few users or want your users to be completely in the cloud without any intervention or additional on-premises infrastructure requirements.

The figure below represents the general authentication flow for In Cloud users.

Under this model, users and their attributes are synchronized from your on-premises AD to Office 365 (Azure AD) using a tool known as Azure Active Directory Connect. You can install this tool on either a domain controller or a member server in your on-premises AD.

In order for a user to synchronize with Office 365, they must have three attributes populated in your AD: Display Name, User Principal Name, and Primary email address. Also, in order to correctly sync a user with Office 365, you need to make sure the user’s UPN suffix in your on-premises AD is of an Internet-routable domain (.com, .net, or .org) rather than .local or .internal.

You can also configure Pass-through Authentication in Azure AD Connect to authenticate your users in Office 365 through your on-premises AD instead of sending the password hash from AD to Office 365.

Only certain attributes (e.g., phone number) can be managed and changed by the admin from Office the 365 portal for these user accounts. All other attributes can only be managed through your on-premises AD.

This model allows admins to manage users from a single place. Users also benefit from being able to use the same set of credentials to access their on-premises machines and Office 365 applications instead of storing multiple credentials for different services and applications.

The diagrams below show the general authentication flow for Synced with AD users: 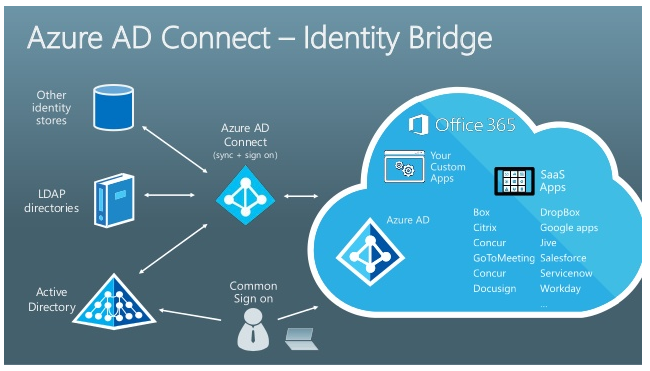 This is the third and final identity for Office 365 users.

Federated users are also considered to be Synced with Active Directory user accounts. These are the same user accounts that are synchronized from your on-premises AD to Office 365. However, the difference is in the authentication process when signing in to Office 365.

There are times when some organizations don’t even want the hash of a user’s password to leave their internal network due to their own security and compliance policies; they may want their users to get authenticated from their on-premises AD instead. In such cases, you can use a federated identity to essentially build a trust relationship between your on-premises AD and Office 365.

According to Microsoft, “Federated users are ones for whose authentication Office 365 communicates with an on-premises federation provider (ADFS, Ping, etc.) that then talks to an on-premises authentication directory (i.e., Active Directory or other directories) to validate a user’s credentials.”

Under this model, users are synchronized with Office 365 and managed from an organization’s on-premises AD. But whenever they try to log in to Office 365, their authentication is done through the on-premises AD with the help of ADFS.

In order to ensure high availability, it’s recommended that your on-premises environment have at least two ADFS Servers—one primary and one secondary—as well as two WAPs (Web Application Proxy servers).

The diagram below represents the authentication flow of ADFS: 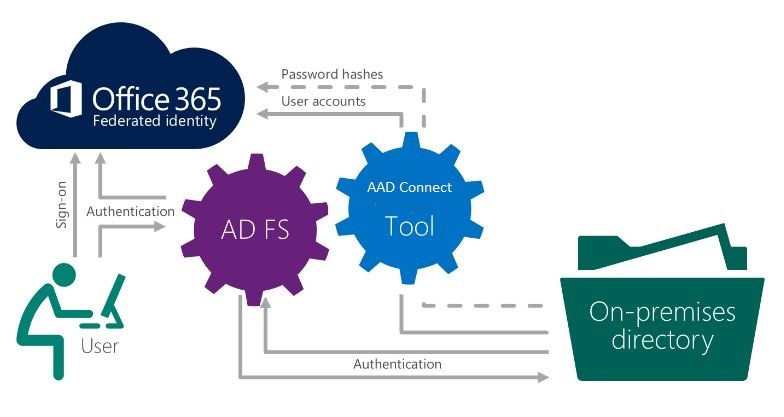 Which Office 365 identity model is right for your business?

Cloud identity: Everything is done in the cloud, so there is no need for on-premises servers. This is the simplest option to manage.

Synchronized identity: Sync on-premises directory objects with Office 365 and then manage users on premises. You can synchronize users’ passwords for the cloud and on premises, but they will have to sign in again to use Office 365.

Federated identity: Sync on-premises directory objects with Office 365 and then manage users on premises. Users keep the same password for the cloud and on premises and will not have to sign in again to use Office 365. This is sometimes referred to as single sign-on.

How to use eDiscovery in Microsoft 365

Why we love Teams Essentials

Teams Phone with Calling: What you may have missed