Sherweb goes remote during COVID-19: how we equipped 700 employees to work at home

David Fournier usually works in a bright fourth floor office as part of Sherweb’s Security Support team. But since the COVID-19 outbreak, David and his colleagues have been forced to work at home.

No easy task, especially when you’re talking about a workforce of more than 700 employees in two different cities. David and his team spent an intense week recently, running tests, deploying virtual servers and packing computers for delivery to their colleagues in Sherbrooke and Montreal.

While most of Sherweb’s employees were already equipped to work at home, about 150 technical support staff needed special devices.

There were a few bumps along the way. But David was also happy to see how hard his colleagues worked to get the job done.

Sherweb spoke with David and Geneviève Janelle to find out what happened.

Note this interview had been reduced for clarity. 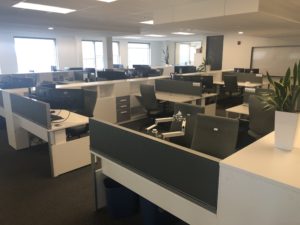 So, David, tell me how all this started.

David: “It was after the government placed restrictions on us to limit people moving around.

On the technology side, most people would already be able to work remotely, but for security reasons were not set up to do so. What we had to do first was make sure the solution we put in place would still be safe and would still allow us to protect the data for our consumers. The first step was making sure we had a list of all the users and that we’d be able to enable multi-factor authentication for those users. And then we started deploying Remote Desktop gateways in sufficient capacity so people could connect remotely from home from a non-corporate laptop or desktop to their own workstation.”

You had to mobilize other people. You had to get the hardware. Tell me a bit about what you did.

David: “We worked with both the infrastructure team and the network team. No physical device or new physical hardware was needed at the office. We already have the infrastructure in place so with virtualization, we were simply adding new virtual servers. In terms of desktops, I know that for some projects, we did have to equip some of our customer support employees with computers. I know that at least 100 to 140 computers were sent to the employees’ homes so that they could work.” 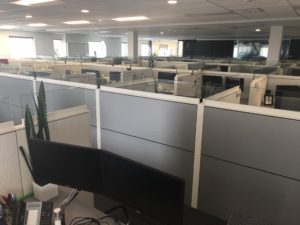 David: “The plan outline was created in about a day. Obviously, it kept changing as we went forward. As far as carrying it out, it took most of a week to get everything in place.

“The planning phase was mostly done by the operations architect with the whole business continuity team. Once they had a plan, they had a few ways to go and fast. There were three solid possible solutions we were following: the remote desktop gateways, a VPN solution and a virtual desktop infrastructure solution.”

So how did you feel l when you first heard about this? Were you overwhelmed?

“I knew it would be interesting. It was just the timeframe that we were asked to deliver in was very, very short. All the specifics altered. It just looked like a blur.”

David: “It’s something we had been looking at for longer term — enabling remote work for most everyone. So, we had a good idea for where we’re going. I knew it would be interesting. It was just the timeframe that we were asked to deliver in was very, very short. All the specifics altered. It just looked like a blur. We knew we would be working a long time that weekend, and we did. It went well. Obviously, we hit a few roadblocks. But most everyone knew and understood the urgency behind it and the need to do it quickly. So, the progress was fun. I was satisfied once we got solutions working.”

Confident, but stressed out

Were you stressed out?

David: “Initially, I was. We hadn’t deployed this solution at scale before. To be sure to have about 100 users on it with minimal testing…I was stressed out. Confident, but stressed out. I think the confidence won and we got it done.”

How about the rest of your team? Were they stressed out? Were they looking to you for leadership?

David: “Yes, a few of our people were very stressed out. We’re used to having short deadlines, but this one went beyond that, I’d say.

“Some people were unsure of how to proceed. For that, I think our architect had a good lead — sent us in the right direction. And we had the support from our managers. They made it clear that whatever we needed, we simply had to call and they’d make sure we’d have it. Once we got the progress showing, I think everyone calmed down and just continued to focus on the work to be done.” 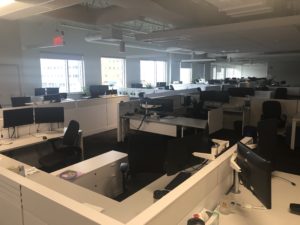 So, this took about a week altogether?

David: “Working from Friday morning all the way to Monday night, that was a big rush — where most time was spent. And then the remainder of the week was mostly testing, getting confirmation from our clients that the way we’re doing it was fine with them, not going against their requirements for their contracts with us and that we weren’t affecting our security posture either.”

Okay, if I’m a customer support employee and I receive a computer at home, how am I going to know how to hook it up properly and everything?

David: “That’s where our corporate IT support team comes in. First, we expect the minimum level of technical knowledge about computers from the support team. They should have an idea already about how it works. Then after that, once a computer is plugged in, it’ll just connect to the office. The corporate IT team was doing phone support.”

You mentioned that you hit a few roadblocks. Could you tell me a bit about that?

David: “We needed new firewall rules in place and we asked the network team for help. They made a change, but there was a glitch in the firewall cluster. One of the two firewalls started doing things that it wasn’t supposed to, like randomly sending traffic, or not forwarding traffic to where it should be going. That took a few hours out of our schedule.

“The second issue involved security measures. We weren’t at the point where we knew what needed to be enabled or disabled with the solution we had looked at. It worked fine for the administrators, initially, but then when it came time to users, the solution wouldn’t work. So, it was a lot of searching to make sure that what we would remove from security measures or what we would allow for the users would actually still be secure and work for the client.”

We’re talking a lot about hardware, software and virtual servers here. But we’re also talking about people and how they’re being affected in this case. What have you learned about your colleagues from this experience?

David: “I was actually surprised at how everyone was willing to bend over backwards to get this working. Everyone came together to get this done. Everyone wanted to put as many people out of harm’s way as possible. I was surprised. I expected more pushback. Whenever we had something that needed to be done that was not planned initially or we realized it required a few more steps from someone else, they jumped right in. They were always willing to help. Maybe not always smiling, but they were there to help.”

Now that everyone is set up, how do you like working remotely?

David: “I’m well set up and I can isolate myself more easily when I need to focus. But it’s a bit harder to keep a sense of how everyone else is doing, so I reach out to my teammates on Teams every day. Overall, I don’t find it difficult.”

Geneviève Janelle, a Project Manager at Sherweb, helped coordinate the delivery of about 140 computers to customer support staff in Sherbrooke and Montreal.

“We started wrapping at the end of the day on Tuesday and finished Friday night.” 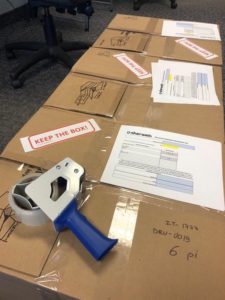 How many people were involved in the logistics?

Geneviève: “About a dozen. There were people wrapping, a project manager who oversaw all the details, plus each department had someone who was gathering information for us.”

How long did it take to prepare the computers for delivery?

What was going through your mind?

Geneviève: “I was operating on automatic pilot. I wanted everything to run smoothly so the whole thing would be completed by Sunday night. I wanted all Sherweb employees to be able to work securely from home to protect their health. So, I set all my fears aside concerning the virus and I went to the store numerous times to buy what I needed for this project. The number of deliveries changed as the project evolved and I didn’t have enough wrapping material. Since I had practically bought out all the supplies in one store, I had to go to several stores to find what I needed. Ordering online wasn’t a reliable option because of the delays in delivery.”

Did you take extra precautions?

Geneviève: “I bought several packages of pens so the delivery people we hired could give a pen to each person and avoid having to handle it again. I wanted to ensure there were no cases where the same pen had been handled by several people all day long (protection for both our employees and the delivery driver). If I didn’t have an extra pen, I texted the employee receiving the delivery to have their own pen ready to avoid contact and delays during the delivery.” 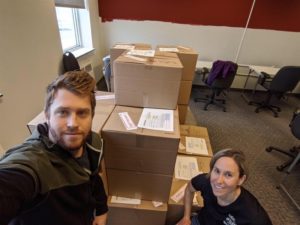 What did you learn from this experience?

Geneviève: “I learned that a task that seems very banal can make a real difference. Let’s face it, wrapping computer monitors with bubble wrap, working until the wee hours of the morning to prepare the schedule for the next day and getting up well before sunrise to make sure the delivery leaves as soon as possible isn’t that exciting.

“But, while I was dealing with all this, exhausted by the lack of sleep, exhausted physically from loading the boxes onto the delivery trucks, I started to think of the nurses and doctors who were on the front lines battling this virus. My work only lasted a few days. Their work would last much longer and the risk they were taking was enormous because they were in constant contact with the sick. Even though I wasn’t as comfortable as I would have been at home, I had nothing to complain about compared with what the nurses and doctors fighting this virus were going through.”

Boost your success by focusing more on MSP people power

Against ‘work martyrs’: women in tech taking time off

What’s next for remote work?